The year is coming to a close and we wanted to take a look back at some of 2022’s most popular apps. According to a report by Sensor Tower, total app downloads from Google Play Store and App Store reached a whopping 36.9 billion for Q1 of 2022, seeing a 1.4 percent increase compared to Q1 of the previous year.

Whether providing entertainment or offering services, mobile apps have become an essential part of people’s lives. But which ones are the most popular apps in 2022? With some obvious big contenders in top spot, we list the top 10 most downloaded apps this year.

The Most Downloaded Apps in 2022 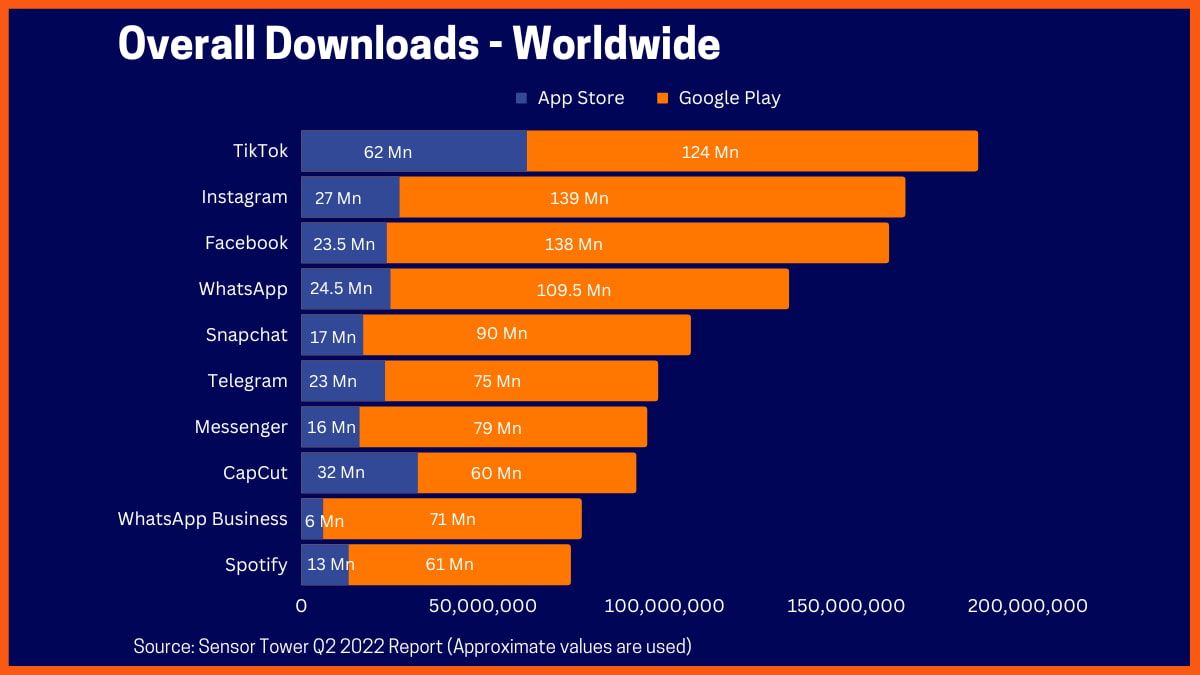 Topping the list is the massive social media platform for creating, sharing and discovering short-form videos – TikTok. The app was the most downloaded photo and video platform in the App Store when it was first released in 2018. Over four years later, TikTok has amassed many loyal audiences with approximately one billion active users worldwide. So unsurprisingly, TikTok is the most downloaded app in 2022.

Another social media platform that made it to the top apps of 2022 is Instagram. It was initially a photo-sharing app that capitalized on people’s inclination to consume visual content. Recently, they introduced Reels, which is Meta’s version of short-form video sharing within the app. Since its release in 2010, Instagram has consistently been one of the top apps in the USA. In 2022, the app has approximately 1.4 billion active users.

Facebook is today’s most recognizable social networking website. The platform’s popularity is attributed to its user-friendly interface, allowing people with minimal technical knowledge to sign up and create a profile. Mark Zuckerberg released the social media site in 2004. Eighteen years later, it is still among the most downloaded apps in 2022. According to Backlinko, Facebook has 1.9 billion active daily users.

One of the most popular apps in 2022 is a messaging platform called WhatsApp. It allows users to send messages, images, videos and audio to their contacts. It functions similarly to text messaging services, but since WhatsApp utilizes the internet to convey messages, it is significantly cheaper than texting. The latest statistics reported that WhatsApp has about 2.44 billion unique active users worldwide.

Despite experiencing massive changes in the last few years, Snapchat remains among the top apps in the USA. The platform was initially intended for person-to-person photo sharing. However, users can now use it for various tasks, including messaging, live chatting, sending videos, creating Bitmoji avatars and sharing “stories” that are only available for a short time before they become inaccessible. As of July 2022, Snapchat has approximately 616 million users, according to DataReportal.

Telegram is another instant messaging tool that is one of the most popular apps in 2022. Unlike WhatsApp, it allows users to share and receive messages without sharing their phone numbers. The app’s signature feature is its end-to-end encryption, making it a highly secure platform for sharing information. According to Demand Sage, Telegram has over 700 million active monthly users.

Messenger is a messaging app developed by Meta for its social platforms. It was initially released as Facebook Chat in 2008, but the company revamped the service in 2010, then published it as a standalone app in 2011. Messenger is free to download and allows users to message their contacts from Facebook and phone. The app has at least 1 billion monthly users, as reported by DataReportal.

CapCut is a free video editing software that allows users to edit videos on their smartphones and share them on platforms like TikTok, Instagram and Facebook. Although many video editing apps are available, CapCut is the most popular due to its simplicity and user-friendly interface.

WhatsApp Business is a messaging app developed especially for businesses. It makes engaging with customers easy and provides business owners with tools that allow them to sort, automate and quickly respond to customer inquiries.

WhatsApp Business is a messaging app developed especially for businesses. It makes engaging with customers easy and provides business owners with tools that allow them to sort, automate and quickly respond to customer inquiries.

The last app on the list is Spotify, a digital streaming service that gives people access to millions of songs, videos and podcasts. It has free and paid subscription tiers. The Spotify Premium plan is priced at $9.99 a month and gives users an ad-free listening experience.

Create Next Most Downloaded App With Jackrabbit Mobile

Jackrabbit Mobile is a leading mobile app developer dedicated to providing customized digital solutions that meet our clients and their users’ needs. Create the next most popular app and reach out to our team today.